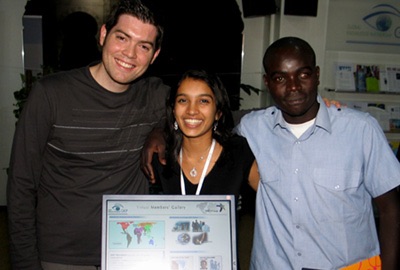 The world’s most creative and empowering youth-led websites have been announced! Scores have been tallied, publications have been designed, and the stage is set for Tunis to showcase the best young e-content creators to the world!

We’ve seen online music communities, digital design training for slum youth, interactive gaming platforms e-learning flash applications and an HIV/AIDS information portal to name just a few of the over 300 projects from 70+ countries. The top three projects in each category – Development, Creativity & Culture and Community Engagement – took center stage for Phase II of the Information Society (November 16 – 18, 2005) at the Gala on opening night.

In the often tired, formal environment, the energy and creativity of the Youth Caucus truly stood out. The eight Youth Award winners in attendance had a unique opportunity to network with over 30,000 delegates and showcased their online projects to the world. The opening Youth Award Gala event awarded category winners in a ceremony featuring high-profile speakers, flash videos, live DJing and a packed house. It was syndicated in over 30 European television stations, as well as being broadcast on the Tunisian television company ERRT.

Award winners and runners-up also took center stage at a WSA Content Forum entitled “The Future is Now: Best Practices from Young People in the Information Society” and a closing reception in the Youth Hub space co-hosted by TakingITGlobal and Microsoft. And stay tuned to this space for future Youth Award news!

Ladies and gentlemen, here are your Youth Award winners!

WSYA in the Media

Act on the Millenium Development Goals!