Founder of The Inquisitr 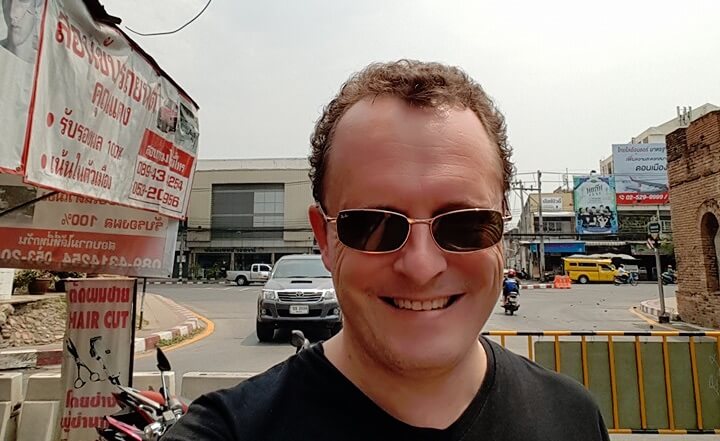 What’s your background and how you got into blogging? What were the various steps you took to get to The Inquisitr, “a daily mix of tech, pop and fun stories from around the world”?

I became involved in politics at a very young age. My father was a small businessman in Australia and very much against the left-wing government of the early-’90s, and that sort of reflected on me. I started a conservative politics site in 1994 or 1995.

I ran the first aggregate poli sci — conservative political sci — site in Australia in 1996. I use the word “conservative” regarding Australian politics – it wasn’t like “conservative” in the American sense. I am basically libertarian.

That was more about advocacy. Did you have any idea at the time that you could make a living at it?

Not when I started. I have no idea at all.

I started to get some consulting gigs, was the webmaster for the Republican Referendum site, and I did some PR marketing, management, odd jobs along the way.

Blogs came around in 2000, and I started reading them. I had done something similar: we were doing a lot of links out on Australian Conservative Politics, and we were also bringing in writers to do guest posts. It was not structured like a blog, but it had a blog like qualities.

At that stage, I couldn’t decide what to write about. I had started to lose interest in politics, and I didn’t want to write about it. True story: I couldn’t work out what I wanted to blog about, so I decided to blog out blogging, and that was the Blog Herald.

I think that was the form that I was interested in: I was reading everything from lesbian and gay blogs to rabid political sites, to mom and pop stuff. I’d never seen anything like that, and the global voices, what people are doing in their lives – it was fascinating.

When I started it I was like, maybe I might get a gig out of it – that was my only thought about making money because in 2002, 2003 there was no money. There was no Adsense – no one was making ads on blogging. I can remember when the first ads went out on blogs. And the outcry, literally from day one, about how, “We’re never going to read a blog that puts ads out – we’re never going to read it ever again.” That was the hue and cry about that.

I said to my wife in 2002 — my only son was born that year — and I said when he gets to school one of us need to be home, take him to school. I’d love that to be me because I always tinkered on the side and done bits and pieces. My wife, who’s actually a very senior manager for public utility now and does community relations for them, has always “worked.”

So that was in the back of my mind. I had Weblog Empire by then, a small network of about five blogs. In 2004 I sent an email out to Jeremy Wright and Darren Rowse that said, “Look we’re doing pretty good traffic, let’s talk about doing a blog network, an ad network,” and that led to b5media about five months later.

I was at b5media about two-and-a-half years. It grew from when we started from a few blogs to 250-300 blogs when I left, and more than that in writers. It was a great model for a network at the time, but it’s not today. They’ve changed the model. They’ve started rolling up the blogs into great big blogs, and that’s the direction the market’s heading. I wasn’t happy with the direction the company was heading at the time, and I left.

And that’s when you headed to TechCrunch?

Well I left on a 6-month non-compete, and I had enough money where I probably could not have worked for two or three years, but after about a month the novelty wore off.

So I was doing proxy networks because I couldn’t do blogs. I planned proxy networks, which can I add is the most stressful thing I’ve ever done in my entire life because you were constantly getting chopped off servers. You’re always getting into trouble. I made good money, but it got too hard, and then I got a call from Michael – as simple as that, there was no interview.

DR: Second or third I think. He got a recommendation from somebody, or he decided he needed somebody to help him. At that stage, he was the only one writing something. At that stage could write, I just couldn’t build anything, so I went with Michael.

From Australia, so a virtual company?

I’m in Melbourne now. I used to be in Western Australia right at the other side of the continent, so I was very very remote. You know I could fly to South Africa in a quarter of the time it took me to get to the States. I did that for twelve months.

It did – traffic more than doubled in 12 months. Michael was incredibly well connected, and he has a unique brash style…

He is, and he’s one of the — one thing I miss, and I’m no longer, unfortunately, friendly with Michael — but he’s also one of the most intelligent guys I know. When he’s not ranting and raving, you can actually sit down and have some of the most amazing conversations with him. He knows an awful lot about this business, and I miss that actually. But he was prolific; he also doesn’t sleep an awful lot. He works far too hard. Which I think maybe today probably wouldn’t be as bad…

And now he’s got a staff of almost 20 people.

Probably more actually if you count the various spin-offs. So, but yeah he used to do 18-20 hour days. I was in Australia, and he would often go to bed after I would.

One of the things we learned from the Top 100 bloggers is the sheer volume of work they produce, the prolific nature of it…

You think that was one of the key things that separated him from the other blogs tech blogs, the sheer volume?

Yes. I think he also, maybe not a natural, but he’s a very prolific networker. With Michael, it all came down to contacts, and when it reached that tipping point, everyone wanted to be a part of it as well.

Even when I was there, you’d get, on a busy day, 200 story tips. It was just the amount of data coming in. The hardest part about working for TechCrunch wasn’t writing, it was filtering through all of the tips coming in actually to find the stuff to write about. And I would spend two to three times more time every day just trying to work out what to write about and contacting people to follow up to decide if it’s a story I would write.

So, good segue to The Inquisitr: you had the Blog Herald, Weblog Empire, b5, then you were at this rocket ship, TechCrunch, and then you started from scratch again with The Inquisitr and very quickly grew an audience and got into the Top 100. How did you do it?

But yeah, you started from scratch in a more developed place…

If I knew what I do now 15 months, I would have done it in six. I wish I were joking. We made a lot of mistakes along the line.

In retrospect, the madness of the idea for this site actually worked to our advantage. The idea to cover Britney Spears and tech and Big Foot were insane.

Did you feel any pressure that, given that you were known as one of the gurus of how to start a blog, that you better be able to do it yourself?

You know I got to the point with TechCrunch where I could handle the cutthroat nature of it, but I wasn’t enjoying it. It had become a getup, write write, write, research research, research, and go to bed. It was a lifestyle issue. My son was getting older, I wasn’t spending nearly enough time with him, and I wasn’t having fun. So I traded it for what may not become the world’s most prominent blog, but hopefully, I’m going to make money at it. Hopefully people will like it, and more importantly, I get to spend time with my son, and my wife. So that was, that was the principal.

What are the key things to grow traffic and then also raise your authority rank, or are they completely unrelated?

Style, content, churning stuff out. The sad truth is the more content you produce, the more page views you get. I initially started with a team of three of us, with a fourth part-time, weekender. He didn’t work. He lasted about a month. But it was that constant, consistently bringing up decent content…..

How many posts a day were you doing?

Was there a word minimum?

Average word length would be no more than 200 to 300 words. If I write a serious tech piece, I will do 500 to 1000 words. The first paragraph should always describe what the post is about so if you don’t want to read on, that’s fine because you’ve already got that take on it.

So let’s switch gears now. What do you do to market yourself?

You’ve got me stumped. I don’t really have a marketing strategy.

So you’ve used great content and a lot of it to build your traffic up to what is it today?

Two quick questions. One tactical, one strategic. On the tactical front, what’s your philosophy regarding ads, placement…

When you say philosophy you mean about where they should…

Well you remember in the early days you said that you put an ad on the site nobody’s going to come, and I think the audience is clearly over that.

I think advertising is evolving in blogging. You don’t want to overwhelm, I don’t like interstitials. I would consider doing pop-out overlays, definitely not pop-ups. You need to respect the audience. So the audience is changing – they are far more forgiving than they used to be, but you should never push it.

The strategic last question is, do you mean to build a media company?

I would like to be either the third or fourth largest news media companies. Online, anyway. I can’t complete with TV stations, but regarding the newspapers, which dominate the news online, that’s what I would like to be.

What’s the advice to someone who wants to make a little money on the side blogging?

Great, if you want to make a little money on the side. If you want to get rich quick, don’t even bother. There is no such thing as getting rich quick. I know everyone goes out there and sells “make money from blogging.” It’s rubbish. It takes six to nine months to establish a site.

And I like what Jason Calacanis says, he says the real test is two years. You get to two years that’s when you’ll know if you’re going to be great or not. We’re fifteen months in. We’re hopefully heading in the right direction. You got to have patience and don’t expect to make a lot of money quick.

This interview was conducted by Richard Jalichandra on October 22, 2009.