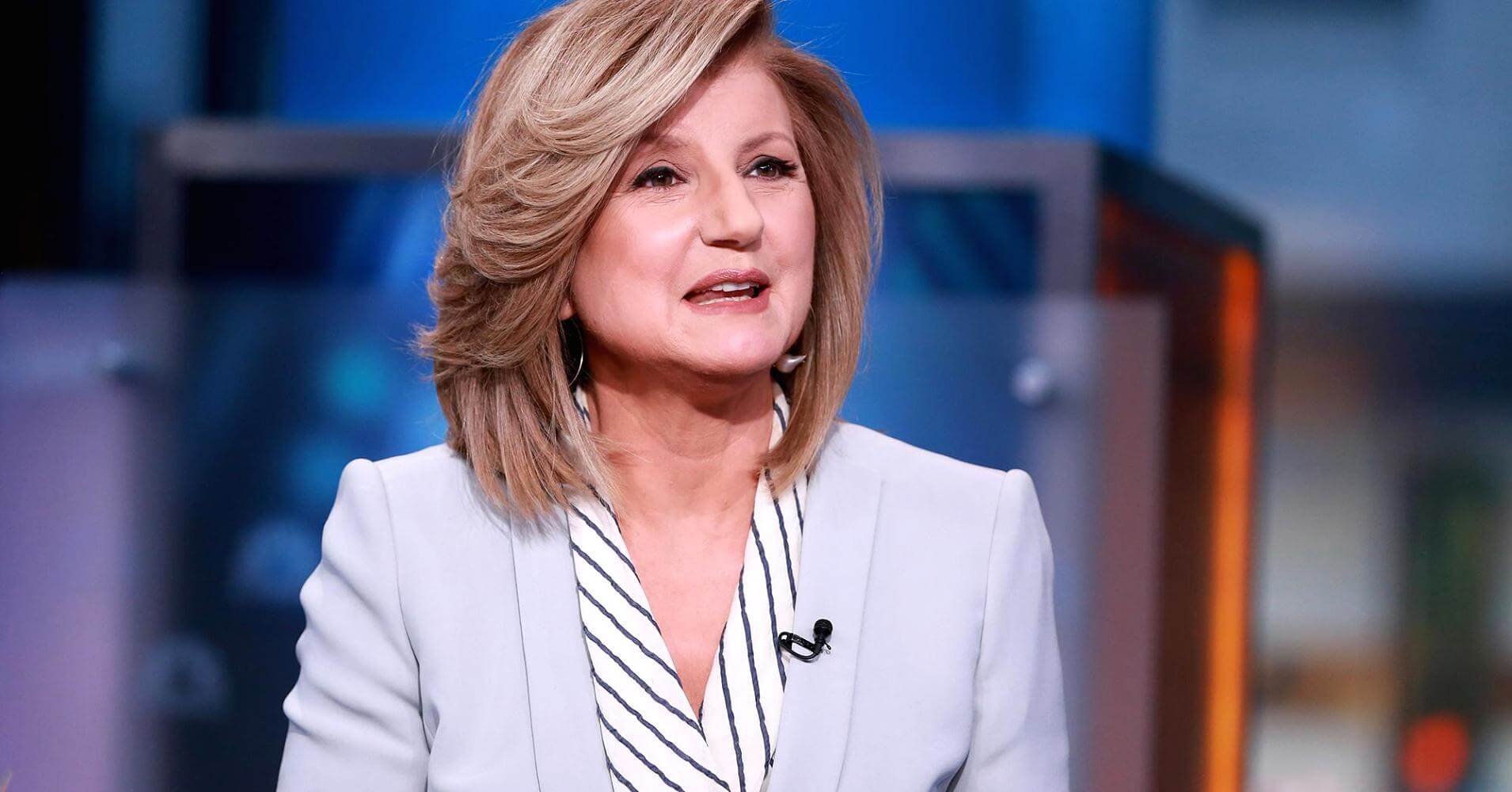 How did you discover blogging?

For me, it was the excitement of seeing the conversation moving online. I wanted to be a part of that, so we started Arianna Online. The key thing was the interactivity. It was the discussion around the ideas that I was writing about. That was what really appealed to me.

I launched that with Andrew Breitbart and the thing that was exciting was to see the response from the people and the discussion around the ideas – so much so that my mother, who was living with me at that time, started an advice column on Arianna Online called Ask Ya-Ya (“Ya-Ya” is Greek for “grandmother”).

She’s never been on a computer, so she would sit at the kitchen table and answer the questions longhand on yellow pads, and we would type them and put them on Arianna Online.

So that was really the first impulse to do something online. The other was when I saw what Josh Marshall and other bloggers did with Trent Lott; that was a moment of another kind of awakening when Lott basically had to resign because of the work of bloggers. They stayed on the story and kept adding information about Trent Lott’s past and previous statements and propagating tips from the community, and he had to resign. That was an amazing moment because it showed what could be done: not just reporting the original story but developing the story.

So if there is any mistake you post nothing…

Yes exactly, but the online way is that it unfolds, and everybody knows what you are doing so anybody with any piece of information can send it to you, and that is the “wisdom of the crowd.”

Anyway, it is a very exciting moment for me – I thought about it and wrote about it as I write about everything that excites me. So after the [California gubernatorial] election in 2003 [to recall governor Gray Davis – she was among a large field of candidates including Arnold Schwarzenegger, who won the race], we had a meeting here of various people, including Kenneth Lerer and Jonah Peretti, who were looking at what was done by the media during the election. What we could do to basically reinvigorate journalism, focusing on what was happening online and what was not happening but should be happening.

So in those early conversations you were thinking a journalism opportunity was potentially a media opportunity and business opportunity?

Well definitely a media opportunity, yes, which includes everything, including journalism, citizen journalism, and news aggregation with our own attitude, which in the end is what happened.

And the third element from day one was a community: from the beginning I wanted to make sure that the community was going to engage in a vibrant, spirited, but civil conversation. Immediately this got us into the problem of trolls hiding behind the anonymity. Since the technology did not exist to prevent that through filtering, we had human comment moderation 24/7 from the beginning.

When you started with it, it was ’05 about, correct?

You literally started on just a blogging platform…

Yes, we started on Movable Type. Meena and Ben Trott [creators of Movable Type] came here for dinner, and they spent the night. We had a great connection, so we started with them, and we launched with me sending out an email to all the interesting people I knew — some known and some not — and ending up with 500 people with passwords so they could post when they wanted.

We knew that we could keep the blog populated since people could write whenever they wanted. I was writing every day at that time — now I write three times a week — and so there was fresh content on the blog all the time.

It was always about people with interesting ideas, people you would like to sit next to at dinner: they could be actors, business people, painters, poets, anything. We didn’t really go for professional journalists.

Oh yes, the original team was Kenny and me and Jonah and Roy [Sekoff].

Roy was a founding editor, and he has been the editor in chief from the beginning, and Kenny is now the chairman of our board. So that was the team of four that started it, and also I had a research assistant here called Colin Sterling, who as it happened at the time wanted to move to New York. So he moved to New York and became the blog editor, and he is still the blog editor who has been fantastic.

Did you get any funding or were you self-funded?

AH: The way of the fund in which we agreed that we would give or raise half the money individually. I raised from my part from people like Larry David. We each contributed about $100,000, and that was how we started the Huffington Post.

So when the first round of funding came in, and you obviously felt this could really be big and needed more capital?

What happened is that we wanted to expand, and from the beginning, Kenny and I never just wanted to talk to people who agreed with us, that was never our intention. We tried to talk to everybody, so that meant that two things: one, we didn’t just want to provide politics. We started launching the other verticals because if we only offer politics, it will restrict the universe that you are speaking to. Each one of us, however politically obsessed, is interested in other things and we wanted to cater to all the interests of our readers.

And now you guys are the Big Dog.

27 million unique visitors last month. We have had a significant increase, and in September we had the most significant growth, and we are now at 30% over what we were at the height of the election!

Ahh, it is fantastic! So that’s exactly my next question: When did you know that this could actually be huge?

You know, I am a superstitious Greek person. I don’t think — I really honestly do not think — in those styles. I feel very blessed, doing something I love to do. Kenny didn’t go into this to make money — he had made his money — and I was making money through my books and my speaking. We are now running a company, and we want it to be profitable, but that was not the motivation, nor is the primary motivation now. We don’t want to cash out – we want to keep expanding it. We have so many ideas of what we want to be doing – we see it very much like a work in progress.

So, you started a business but was more intended to support your passions and some of the other things you were doing, whether speaking, or your books or whatever, and it grew from there. This is something we found a lot of in the State of the Blogosphere report: that people with strong interests aren’t looking to make money from their blogs directly – they speak or teach or write books, and the blogs support these efforts.

Yes definitely, first of all, I mean, I cannot remember a time in my life when I wasn’t working on a book, because I wrote my first book when I was 22 and now I am 59.

My decision now is I am not writing a book, I don’t want to write a book. I want to put all that energy into our expansion online, so that’s a shift for me: anything I want to say in a book, I will say that online in the Huffington Post, and that’s a shift.

Regarding journalism, from the beginning, as well as doing the things I mentioned like blogging, writing news, and community, we wanted to have reporters, but we didn’t have the funding in yet. So, as soon as we could afford it, we started adding reporters now have an office in Washington, Chicago, New York, Denver, and we have a great team of reporters.

And we are doing it on our way: one of our reporters — Arthur Delaney — his job is to report on flesh and blood of economic statistics specifically. If you look at his stories, they are really fascinating, and we are calling him our “Economic Impact” reporter.

If you read the New York Times recently, a survey showed how mainstream media are covering Wall Street and the banks, much more than they are covering what is happening to the ordinary people. We are covering all that, but we are also covering the economic crisis regarding peoples lives.

We are. Also, we are using our community, and we are using our citizen journalism tools to get stories, from our readers. We launched a year ago “Blogging the Melt Down,” and we are collecting stories on unemployment, foreclosures; now we launched the next incarnation called “Bearing Witness” – you know, asking people to tell us their stories.

How many are actually blogging on the Huffington Post today?

Well we have the people who have their own password, and that’s thousands of people who send blogs.

Password is like our first editorial control – for the people we feel we can completely trust to appear on the site without editorial intervention.

They can post in the middle of the night if they wish. Our secondary editorial control is that our editor decides who is going to be featured on the homepage, or featured on any of the verticals.

So you are actually giving the opportunity to some lower guys: they write some good they have the chance to make a channel?

Yes, absolutely, one of the things I really loved is, when we get emails from publishers or television producers saying can you help us reach so and so, write this blog or appear on MSNBC or CNN – so that’s fantastic. It becomes an additional platform.

Any advice for a person who is trying to build a business out of their passion, whatever the subject is?

If it’s your passion, then that is the key. And I would advise an ad-supported model rather than a subscription model. I can’t believe many newspapers and other sites are still trying to figure out how to close off their content and charge for it. I don’t think it will work unless you are offering something extraordinary that people can’t get anywhere else. That’s how we are doing it.

The interview was conducted by Richard Jalichandra.